This is the companion site to The Tokyo Files, with a focus on danchi 団地, the public housing complexes in Tokyo and Japan that became popular in the period of rapid economic growth following the conclusion of World War 2.

The danchi concept first came to my attention when I found the semi-abandoned Karasuyama apartment complex 烏山第一団地 near Chitosekarasuyama Station 千歳烏山駅, in Tokyo’s Setagaya-ku. I then became enchanted with danchi when I visited the abandoned Asagaya danchi soon before it was demolished. The more I learned about danchi, the more I became fond of them (the Japanese term is danchi moe 団地萌え “danchi love”). I’m from the United States, where public housing is openly spoken of in disparaging terms; in contrast, danchi in Japan are often thought of with nostalgia, especially with regards to the role they played in providing a middle-class lifestyle to a war-weary Japanese population.

I generally think danchi in Japan have been successful, and I suspect that much of this success is owing to the Japanese tendency towards social cohesion. And further, I suspect that Japan’s social cohesion is reinforced by living in close quarters and with the shared spaces that are seen in danchi. I sometimes worry, perhaps unnecessarily, that the rise of gated communities and other anti-social living arrangements in Japan will ultimately harm Japanese society. Of course, others might argue that Japan needs more independent-minded people. But this is a discussion for another place.

A note about language: danchi 団地 are variously referred to as “apartment complexes” or “public housing estates”, but the meaning of the word lies in its two component kanji: 団 (team, corp, brigade) and  地 (earth, land, ground). Taken literally, this term can be thought of as ‘group land’ or ‘team land’, or, most amusingly, ‘ground brigade’. It is the team-spirit aspect of danchi that make them such an interesting topic to me. 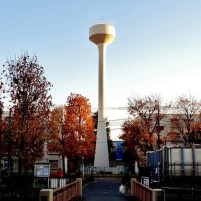